Had Ourselves a Merrry Little Christmas 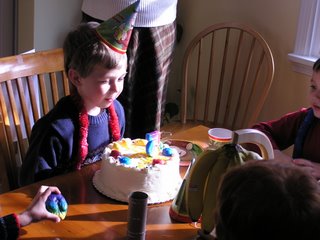 And then some... But let's not get too far ahead of ourselves... First there was a birthday. Or at least a party to display.

INBA had his buddies over and ate cake and ran around the house like it has been too cold to do it outside. Oh, wait, it has been. A great time was had by all.


So, now what are we going to do to keep our minds off pretty paper? 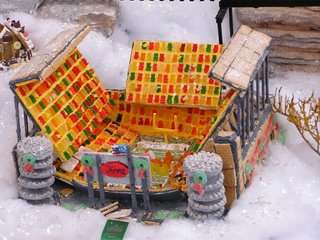 We hopped on the 'T' and took ourselves to town. At PPG Place they have the International Santas displayed (no picture for some reason, you will have to go see for yourself.) It was quite nice. They had music. We had bad timing as that Starbucks shut up their makeshift shop about 10 minutes before we arrived (but there is a 'bucks about 2 blocks away on Market Square- I survived until then.) They had an enormous tree and gingerbread houses decorated as a charity event. Being the 'burgh, someone made a replica of Heinz field. 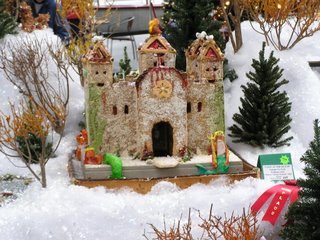 This Bascilica was pretty cool. 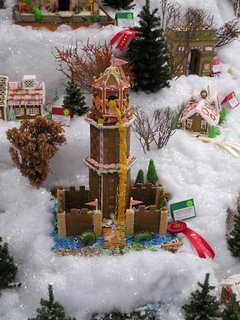 But Rapunzel's tower was my favorite.

You can see the Arc de'Triumph in the upper right corner.
People were quite creative! Not being an experienced gingerbread house builder, I found it quite amusing what people thought to use for decorations. Like, shredded wheat for a thatch roof, frosted mini-wheats for a snowcovered roof, some kind of round wafers that reminded me of a colorful tile roof, pretzels for logs, jelly beans for rocks, all sorts of clever objects. It reminds me of going to see the Rose Parade floats up close. One doesn't automaticly think of kumquats and brussel sprouts and sunflower seeds when thinking of how to decorate a parade float. The first time I saw them, well, I don't know what I was expecting- maybe just the flowers since that is what they always talk about- it was really amazing to see and to think of all the work that goes into them. 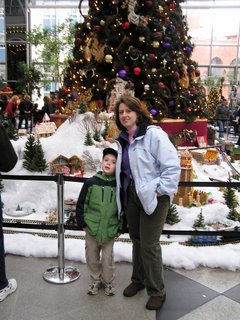 That was a tangent, but here is a bit of what it looked like with more scale. Rapunzel is at my elbow. 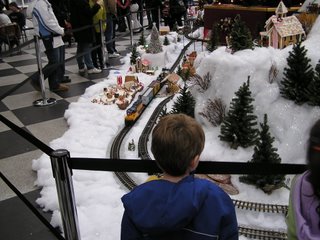 This is what INBA looked like the whole time, yeah, the gingerbread houses were ok, but there were at least 3 trains running... 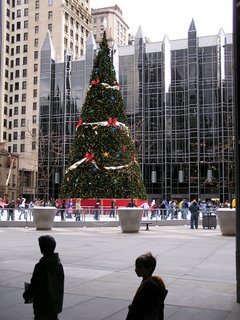 There is an ice rink in the plaza outside. 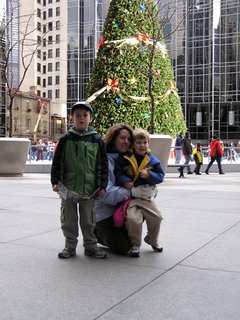 The boys were forced to pose with Mommy... with promises of hot chocolate (Starbucks was getting closer by the moment!) 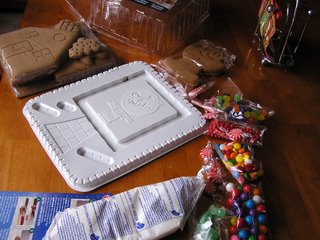 Ok, so I had picked up the kit at Costco about a month ago, but we were inspired to actually put it together. To the boys, that means inspired to gorge themselves with candy.

Check out this kit. That white plate is part of the packaging and the ingenius assembly device!! Squirt some premade frosting in the slots, stand the sides up in it, slap on the roof, ta-da!! Yes, we obviously had issues with this part last year.
It is by Create a Treat. I hope Costco has it again next year! 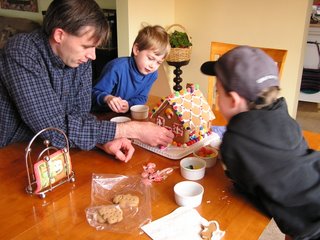 The Mister and the boys had a great time decorating. The little gummies along the edges pick up the light and at the right angle, look like they are glowing! Very pretty. 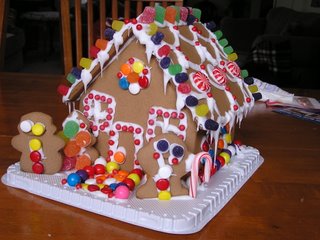 
Look at these boys! 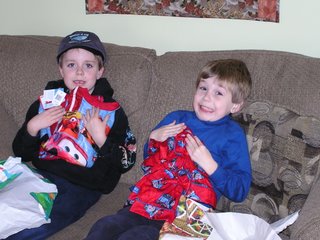 The Jammies are from GMA, but I just couldn't resist INBA's face. Funny. 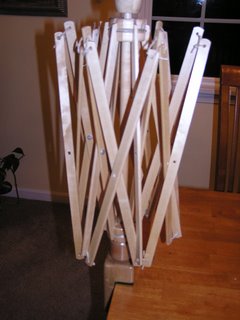 My swift arrived. Thanks, again, to Stacy for the gift card contribution to the purchase. It is killing me, tho, not to wind up all sorts of good stuff and cast on for numerous projects...


what could keep me from doing that? 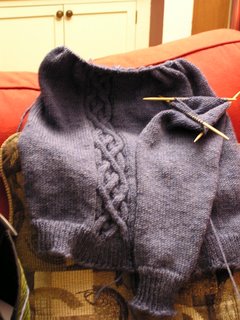 Oh, maybe this.
It must be done by the Mister's bday!!! MUST!!! I cannot take it any longer! Laurie suggested Epiphany as a target date for our respective didn't-get-the-husband's-sweater-done-for-Christmas-sweaters. I will work toward that, but I am thinking that mid-January is more likely. You just don't realize how long his arms are!!!
"All the better to hold you with, my dear!"
While I do appreciate that, I could use this sleeve as a scarf!! Ok, I exaggerate, but my impatience is getting the better of me. Must finish, must knit, must close this post and get on with it! 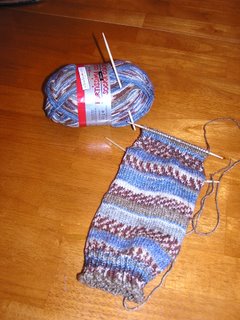 One More thing before I go... The second sparkle sock... For some reason, I didn't think to pick up the new ball when I started it, so this is how much more sock I can get out of 50g. I am about half way into the heel flap. I was pretty surprised by this. I suppose it is useful information but I am more happy at the moment that when I am done, there will only be one blob of leftover instead of two. Oh, and really happy that I am almost done with a pair of socks that is for MEMEMEMEMEME. And they sparkle, did I mention that?
Posted by Heather at 8:44 AM