I Remembered the Camera...when we were about half an hour from home. Ok, maybe a little further.
We went off yesterday to Penn's Colony with the boys. It was quite fun! The boys are still getting the hang of Country, State, County, City.... so the idea of a Colony, well that was just a bit much.

INBA was persistent in trying to understand. So, I told him that it was what Pennsylvania was before it was a state, a long time ago. He says, "Oh, but they had steam trains!"
"No, before Steam Trains." Sorry, but it really is all the kid thinks about. And then I got a little sassy and said, "before dirt." hahhaahha.
He misses nothing. "Before dirt!!! What was under the grass?"
*Sigh* Then we had to go through the whole, no-no, Mommy was kidding, thing. And, "Did they have bushes and trees?" thing. And the, "Are we there yet?" thing. "We've been in the car a really long time." thing. The, "I don't want to go." thing. The, "I am still 4," thing.

Eldest enjoyed the Scotsmen in kilts playing traditional music in a rock and roll style. And I must say Do Ya Think I'm Sexy on bagpipes is pretty, um, enjoyable. I cannot top that.
Posted by Heather at 9:23 AM 1 comment:

Dragons in the Burgh 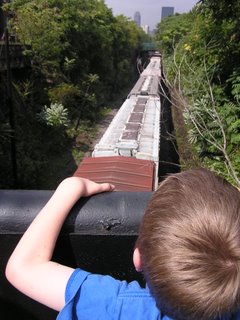 We took the kids down to the South Side to see some dragons.

On the way, we saw a train. Yes, that could have been the adventure in itself, but we continued down the path to the Riverfront park to the Pittsburgh Dragon Boat Festival.
There were plenty of vendors with lots of interesting goods, (it felt, just a smidge, like Chinatown) chinese food and entertainment. By the time we got to where we could see the races, there was an oil barge passing creating a delay in the race starts. It was huge and took quite a while to pass. 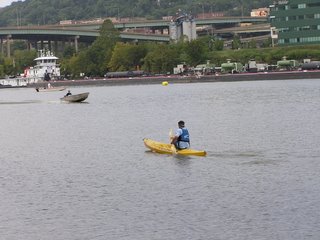 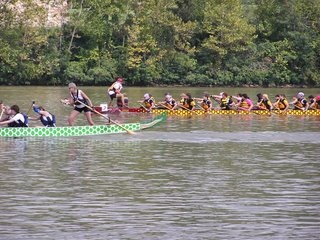 The race that we watched, was two boatfulls of breast cancer survivors. One from Philly, the other from Pittsburgh. Amazing and inspirational. I was really impressed by how many boats there were and how far the teams came. It was a lot of fun. Just a suggestion for when you go next year... bring a chair. Not a single solitary place to sit.

We had a nice time and the boys did, too. We parked at South Side Works and walked over. Before we got back into the car we did a smidge of shopping. Ok, so I did a bit of shopping and the Mister and the boys snacked on trail mix at REI. Actually, the Mister did do a bit of dreaming about his bike rack while at REI. He will eventually break down and buy one. Probably when INBA wants to ride a bike on the trails instead of pushing the Thomas train (whose face has broken off and has lost the seat that used to be ridden on, is frankly unrecognizable as Thomas.) The whole point of this blurb is that if you haven't been down to the South Side lately, you should go. You can really see the clean up creeping along, block by block. And, it is still urban chic and not totally yuppie. Not that I have anything against yuppies, but if you've seen one yuppie neighborhood, you have pretty much seen them all. I prefer revitalization that preserves some character amongst the chainstores. And I like the South Side.
Posted by Heather at 10:32 AM 1 comment:

Boys are Back to School, Why do I Feel so Out of Place?
INBA has embraced 4 year old preschool. I am so glad for him to be having a positive experience. I feel bad, though, when after only 3 days of going he is talking about the one little boy who, frankly, bullied him, but has moved away. Yesterday he was telling me that when this Little Boy wants to fight, he is just going to say no. I just don't know how a teacher can ignore such behaviour in the classroom. I feel bad for leaving him in that situation. I had my reservations, but I really had no idea how much it really was affecting him. I know that I can only do so much, that I have to rely on the school, the teacher, to inform me and protect him to a certain degree. But it still cuts at my heart to think that I failed him in that way. For no reason should he have endured being bullied and for no reason should those teachers allowed it to go on. I don't care what other parents allow in their own home, but that is not acceptable in the classroom, ever. I don't understand rationalizing behaviour based upon bad parenting. Children need many role models and if the ones at home are less than great, it would be nice to think that they could find a better one elsewhere. Gosh, I feel so guilty. Will I ever be able to make it up to him?

Let's Think about Yarn Instead. 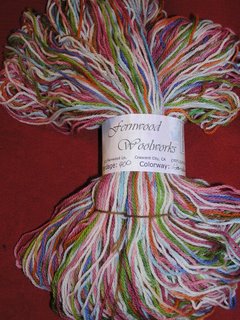 Ah, nothing like avoidance to solve a problem. That's status quo, right?
Either way, I walked down the path to more sock yarn.
This beautiful yarn is a handpaint from Fernwood Woolworks that I acquired from Ebay... I swear I was just looking for a costume for Eldest for Halloween... I don't know how this ended up in my win list. It is called garden harvest. Very lovely and I think I am inclined to make my first pair of gloves with it. I am thinking that spring colors will make me feel better during the long grey winter. Ok, hoping. 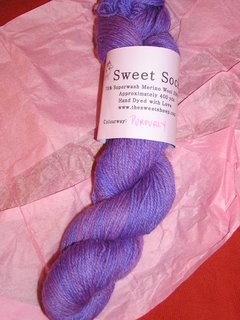 Oh, that Damn Harlot. She was oooh-ing over some Sweet Sheep sock yarn and I inadvertantly looked. And then I saw this. Purpurly and Catholic Kilt. Catholic Kilt is navy and white and burgundy. My Mister says it reminds him of Catholic School Girl plaid.... Oh, really? I don't want to know what exactly he conjures in his mind's eye.
And to make it worse, the lovely woman included a hand-written thank you note along with a small sample of the katia bamboo yarn and a discount code for another purchase. Am I really so transparent? I am a sucker for a thank you, I would much rather patronize the nice shops, 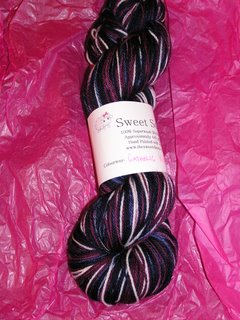 online or otherwise. Maybe the Mister will use the code for a Sweet Sheep Holiday Treat... 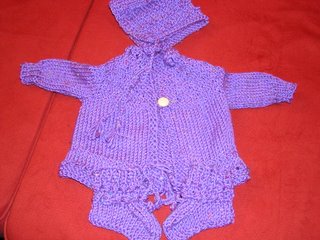 I decided, since I purchased 3 times too much yarn, that Baby H needed a hat and booties. I think it is the sheen of the yarn that keeps it from photographing properly... it is grape, as in a royal purple. And I put tassels on the booties and bonnet. I like tassels. I am not so crazy about pom pons. 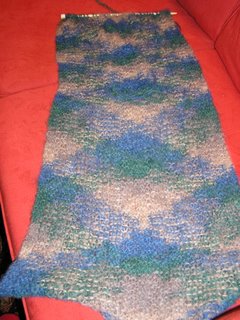 Oh, those shawls. Just about through the second ball on Cascades and have finished the second ball on Sand dune.
No, that isn't a trick of perspective, my diamonds are getting much more squat in the Sand Dunes. I think I would be happier if the green was a little softer and blended more. It just takes too much of the focus. 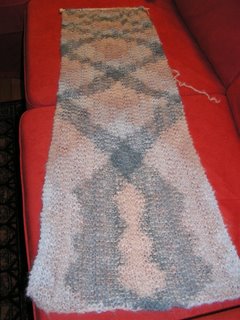 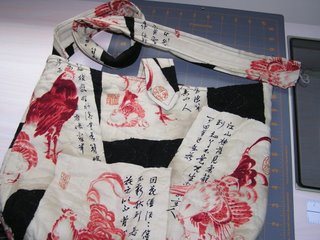 Busted! I am so embarrassed. The Rooster bag that I gave to Laurie, broke down. The strap, on BOTH sides has come loose! The bizarre thing is that there seems to be no fabric fatigue, the stitching just let go. So I am sending in reinforcement. I think a decorative stitch or maybe just double stitching. To add insult to injury, the Mister suggested that it was a "cheap thread" issue. Um, excuse me? Do you really think that I would use cheap thread? Puh-lease. Defective craftmanship, perhaps, inferior materials, not likely.
It is a really good feeling to give a gift that gets used, but my word, woman, what were you carrying in this bag? I will do my best to see that it doesn't fail you again. 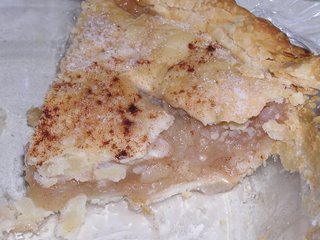 Autumn...
INBA and I took a jaunt down to Trax Farms and picked up some apples. The boys helped me make the first apple pie of the season. I let them in on my secret recipe, just in case they need it when I am gone. Not that they eat apple pie. I know, I know, what kind of freak children do I have that do not like pie. So this is all that is left of the pie... I suppose the Mister and I will have to arm wrestle for it... except that he is at work for several more hours... I need to wash the dish... hmmm. Maybe I will save my bon bons for tomorrow.
Posted by Heather at 9:18 AM 3 comments:

INBA went to preschool today. The teacher is an angel. He is enthusiastic and excited.

Hopefully, Friday will be as splendid.

I won't say anymore, don't want to jinx it.

When does he turn 5? Oh, not soon enough. You have to be careful with these Mayhem genes, 4 is a rough year. Fair warning to all you little girls not old enough to read yet, but destined to become entangled with my little men. 4 is a rough year. This, too, shall pass. Thank God.
Posted by Heather at 11:52 AM No comments:

What Would You Do With a Camera?

Hmm, I suppose I would take a picture... if only I had not left the memory card in the computer.
So here is a link instead, to the World's Largest Teapot in Chester, WV. I wonder if they have ever made a pot of tea in this teapot... could you really call it a teapot if you haven't made tea?

We were on our way to Minerva, Ohio to ride a Train. It was good, less than 2 hours from home, so Mommy didn't get too cranky. The train ride was fun, but the boys would have liked to go faster and farther. Of course.

I worked on a sweater for Baby H, not expected until January, but I found the size 10 1/2 needles before the size 6 I was looking for to work the pea pod yarn. I have been fondling it, wondering where I put those needles. The Mister put up more shelves for me in my Sewing Room. It is just the hauling of all my junk up from the basement that seems to be hindering my progress in putting it all back together and knowing where my junk is. Not that I don't know that it is in the basement right now...where it has been since July. 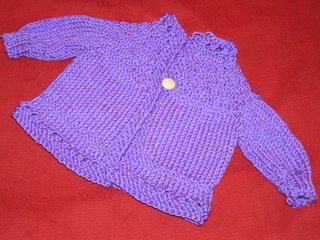 Regardless, it really was almost, only 5 hours for a baby sweater. Not knowing the sex of Baby H, I opted to twist my Make 1's for a less lacy look. I like it so much!
It only took one skein of Caron Simply Soft Tweed in Grape, which is much more of a royal purple. It is an Acrylic with Rayon. And frankly, it is simply soft with a lovely sheen.
Oh, did you notice the button? It is yellow, from the pile in a previous post. See, the junk is useful.
I didn't put the cord through the eyelets at the neck. For some reason, I couldn't put a little rope around the baby neck. 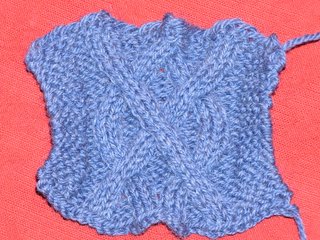 This is the swatch for The Mister's Blue Cable Sweater. I didn't realize how much the cable would suck up the stitches. It is beautiful and I really like the Patons Classic Wool.

Otherwise, still working on the Shawls, I have a sock on, too. The weather is reminding me that I have no reason, ever, not to knit socks.
Posted by Heather at 7:33 PM No comments: