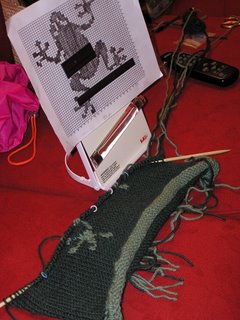 Uh...
So this is intarsia. Hmm, I guess my friends tried to warn me. I don't think that I listened. Whew. I was supposed to challenge myself, accomplished that. But look at the back of this sweater!!! Uh... yuck. The Mister even commented about all the loose ends. So I took on more than I anticipated. Look how cute it will be, though. 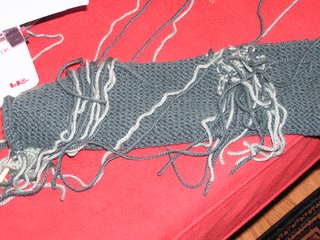 Brother Update
I made it back from Indiana. My Brother is out of the hospital and on the mend. He looks better each day and is healing. He has a hole in the back of his leg where his femur broke through. After the second surgery to clean out bone fragment, he said the pain was a lot less. His ear was torn from the top down into his earlobe, lucky he has a fleshy lobe, could have lost the whole thing. Anyway, he is all banged up and bruised but is getting around on crutches a little. It will be a long process, but he will be fine. He was happy to receive a new Steelers hat, I figured he had lost his other in the accident, but he had been wearing his Michigan hat. Oh, probably the worst of the lot, he had taken his dog, Canello, into the vet last Monday because he was sick and not acting right... Canello had to be put down on Friday. He had some central nervous system disease and wasn't responding to medication. What a lousy week for my Brother.

What about My Boys?

Well, they were really torn. They had daddy all to themselves for 3 days! I guess INBA missed me out loud, but Eldest just called to tell me what a "GREAT!" time he was having with daddy. "I think about you, Mommy, when I am doing art. I do think about you." I should have stayed away just a bit longer. I think the Mister missed me, he was picking at the same leftovers for 3 days. Yes, I did leave other things for him to make. He just didn't. Bachelor life. :) Look out, guys, Momma's back.
Posted by Heather at 10:29 PM