I Cannot Knit While Reading Subtitles

I know that there aren't generally subtitles during a football game. And I did not have the closed captions on either. I am refering to Eldest's mittens that I knit while watching a wonderful movie about a Colombian drug mule that was in Spanish with English subtitles. I have forgotten the name, give me a minute, I will think of it. Anyway, Eldest has lost those mittens (of course, I didn't put a big connector string on them) or I would show you a picture of his mitten and its pygmy cousin (the one knit during the movie- I left out a few rows.) 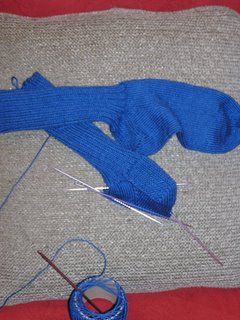 Instead, I will show you the socks that I am working on. I was working the heel flap and gusset tonight during the Super Bowl that those crazy Steelers won. You cannot tell in the picture, but I cannot really do accurate decreases while watching the commercials. My gusset is a little wonky, but not enough for me to frog. Either way, I am on the home stretch into the instep. I can finish this up and then focus on training for the olympics. I need to swatch to learn the intarsia and finish charting my frog. I have the grid taped to the window over a blow up of the picture, half traced. For many reasons other than my tracing we could use some sunshine in the 'burgh.


Speaking of the 'Burgh

I suppose I am going to have to take the boys out to see the victory parade. I suppose that it is history. I suppose that Eldest is going to be stoked that Ben "Roth-ees-burg" and the Steelers won the big game. I suppose this means that we will have to endure more... ugh. Well, Congratulations, it was quite an accomplishment.
Posted by Heather at 10:59 PM