Me 'n the Harlot 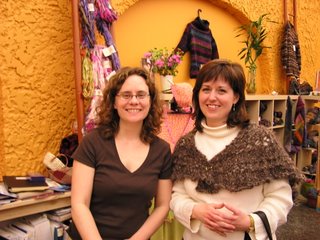 A Little Bit of Pittsburgh Cool.

What to do on a Friday night in Pittsburgh while the hubby and kids are tucked in snug and well? Spend it with a Harlot, baby.

My most recent brush with celebrity, is the lovely Stephanie Pearl McPhee. She was at Knit One here in the 'burgh for book signing. She didn't do a reading, she instead entertained us with anecdotes about her quest to be cool and how she undermines her own efforts by ending up just being herself. Which, I must say, is pretty cool. How unbearably plain to be just like other people... especially people that try so hard to be just like cool people.

I found it really comforting to listen to her talk, aside from the fact that she is highly amusing, but she talks normal. I mean, she is Canadian, and having grown up in Northern Michigan... well, it just sounds right to listen to a Canadian talk.

Well, I didn't take a picture but I bought yarn to make 2 pairs of socks for me. And it is the most expensive sock yarn I have ever bought, so it may take me a bit to work up the nerve to use it. I guess I was on a warm kick last night, because they are all cranberry and browns. I am glad, too, I had done a little too much green lately. And now that I think of it, maybe it is because of the colors in the bag that The Mister has worked out my guilt into giving it to whom it was intended. What ever the reasons...I like it.
AND, a kit to make a knit shark. Of Course for INBA. The Mister was not nearly as excited as I told him he needed to be. But it really just isn't his way. Anyway, I want it to be a surprise for the boy, so I am anxiously awaiting my evening knitting time so that I can start it. I was proud of myself for not opening it up at 12:30 last night when I got home... but I had an appointment at the gym for 9 am... my priorities are whacked.
Posted by Heather at 4:34 PM

It was really wonderful to meet you. I like the way you talk too.