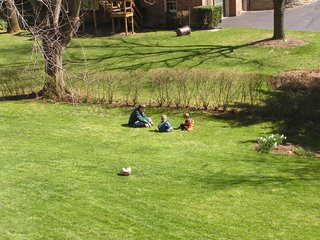 The men of the house spent a relaxing afternoon in the back yard.
The Mister gave the grass a cut. I was a bit concerned, he was grinning as he passed under the window I was watching from... grinning and mowing. He said later when I asked (teased) him about it that he was really happy that the mower started and didn't smell really bad. MMM-HMM.
What ever it takes, babe.

After a bit of cloud watching, they tossed the ball around for a while. 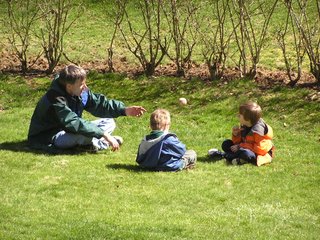 
What was Mommy doing? Mopping, sweeping, laundry... mommy stuff. A good time was had by all. 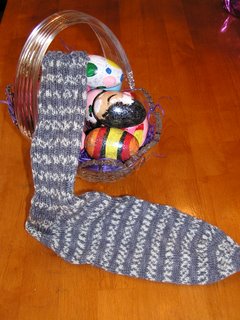 One of The Mister's socks is complete. I should have thought to take a pic of it on his foot... it looks better on.

I really don't care for the color... but it looks right when it is actually on his foot...guess that is why it is his sock.


If I was a good wife and an obedient knitter, I would have cast on the second one immediately... but no. I have some knit picks Autumn Leaves on needles for me, but knit the picot edge hem and 2 rows of the lace pattern and haven't had the whatever-it-is to sit down with them again. So, I started something else for me that I have been wanting to do for a while. 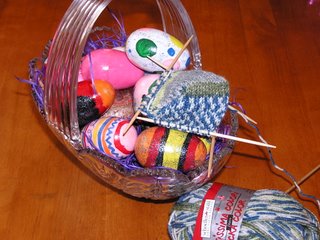 My Disco color yarn that Laurie gave me. Fortissima colori socka color. It is all in German, so I am not entirely sure which part is the official name. It makes no matter to me. It sparkles and that is all that matters. Acutally, even better than it sparkles, it has a really great pattern. I will post more progress, soon.

Obviously, I am doing my first toe up pattern. Quite fun. It is really weird to knit up with the toe closed. It feels wrong. I do like, however, that I can try it on as I go... almost to distraction... did I mention that it spakles?
Posted by Heather at 5:19 PM