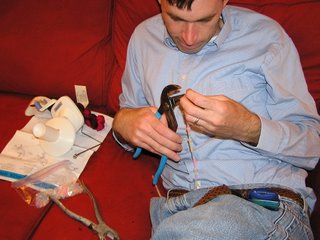 No, the Mister is not to be out-done. Here at Chez Mayhem, we are a crafty lot. Uncle Dave started a bead project with the boys while here visiting with the Cousins. The Boys and The Mister finish what they start. Nice pliers, eh? Hey, if you need to crimp, you need to crimp. 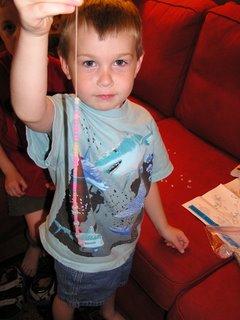 INBA Displays his wares. They are quite cool. Magnetic clasp, glow in the dark... very boy friendly.

Cute Story...
Laurie, the Celtic Queen and I headed over to Knit One in Squirrel Hill on Saturday. The Celtings were in tow which provided an opportunity (at last) afterward for the Boys to all meet. Of course, they fell in like good buddies do.
As we sat on the porch knitting, Laurie noticed that a wasp was trying to build a nest in the leg of the patio table. Older Celting was aware of this and hot to tell the Mister. The Mister was out at Home Depot (he was working on the powder room, pics another day.) As soon as he walked up, OC ran over to tell Eldest's Dad about the wasp. He began sputtering, trying to think of what to address the Mister as, it came out, "Da.. Dude, there's a wasp building a nest!!"
Celtic Queen and I about bust a gut, dude. 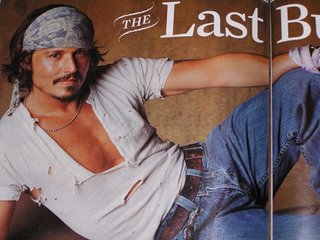 I don't know what it is. But he is hot. Maybe it is that pirate thing, maybe it is that he is 43 and looks like 23, maybe it is the impish glint in his eye. I don't know, but when I opened the July 13th issue of Rolling Stone and saw this, I wanted to rip it out and pin it to my bedroom wall. Do I look 14 to you? Hot.

The Mister laughed at me.

He's hot, but not in the I'd leave the Mister kind of way (I don't think that there is a kind of way like that.) He is rather effeminate, no man should be that pretty, but you know you could be naughty with a long hair, no chest hair, scraggly beard guy like that. Like when you were 23 and could be naughty like that and blame it on penny beer night. Uh, never mind.
Posted by Heather at 9:10 PM

43? Same as me on my b-day. I could go for some of that cheesecake, baby! And everybody really likes the picture. Maybe you should get Dude to strike a pose...

you are right, I couldn't look at johnny and not comment. He is a very attractive man. But, i also want to add that I don't think anybody bought it when we blamed things on penny beer night. But it was fun to watch you get drunk on a nickle.-greatone