At least, I think it has been about that long...
So, let's just get the baby pictures out of the way.
I took these last Thursday (maybe-who knows what day it is?)
My mother will appreciate the first one. (I think if you click it gets big) 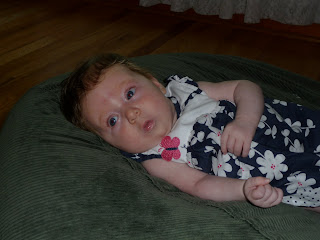 And then a giggle.
*sigh* 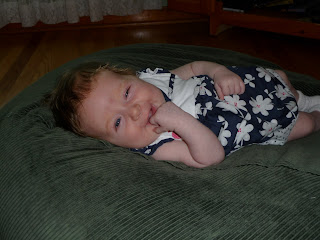 Up Hill All the Way.
I walked the boys to summer playground this morning at the Middle School that is near our house. OMG, it was all up hill. I knew my road was, but I didn't realize that the crossroad was, too! Thank goodness it was only 64 degrees this morning. I had Lil'one in the bjorn and was feeling every pound on my postpartum body.
I guess if you aren't from Pittsburgh (not that I am, either, let's be clear) you don't realize that the "up hill, both ways, in the snow," is talking about the 'burgh and the goat paths they paved to make roads in terrain that no one in their right mind would have thought would be a good place to build a city. I guess, to be fair, the triangle is pretty flat. But Mt. Washington is on other side of the river! Duh.
Anyway, I sweat.

Back on the Ranch
I want to card some fleece.
Just to card some fleece, it isn't like I have time to do anything else with it.
So I cleaned the bathroom and swept the family room and tried to dust. The blue handle has gone missing for the swiffer duster. So, that was a little hard.
Now, my penance is done, and Lil'one took a big poo and wants to eat.
I shoulda played first.

What a cute outfit! Someone with great taste and style must have gifted you with it. :) The Little Flower looks 10 times bigger than the last time I saw her! Yep, uphill both ways (at least it wasn't snowing.) My own shape (round, that is) is much better suited to downhill...

Aww, those pictures (and the actual kid!) are precious!!!

I hear ya on the fleece thingy. I want to do the very same, and when The Boy is at HIS camp next week, I'll take a lesson from you and card/comb FIRST! Thanks, Heather!!