Spring! Spring! Where Are You?!

I finished the Wallaby during the Oscars (which I thought was the best broadcast in many years, if a bit longer than I would have liked.) 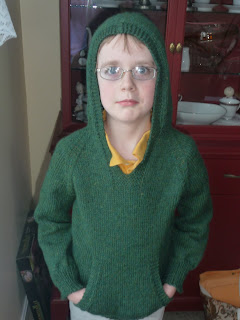 Eldest tried it on this morning and put it back on as soon as he got home from school. He would have worn it to school, but it isn't dress code. Very safe to say that he likes it. I warned him that it won't fit next winter and he can't be mad because INBA will wear it. He said that, indeed, he could, and probably would be mad. Um, we need to work on that one.

It looks so cozy! I can see why he loves it.

Thanks! Enjoying that sunshine and spring temps today!

Love the Wallaby! By the way, I keep meaning to send a message telling you that the name of the book we were talking about at knit night a couple weeks ago is called Miss Nelson is Missing. You probably figured it out by now, but thought I would mention it just in case you haven't.