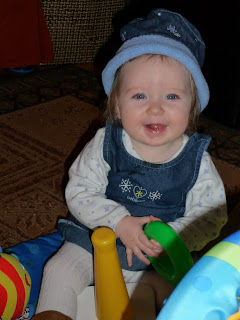 9 months old.
It is going so fast!
But notice, still no teeth. Doesn't crawl... but last night was demonstrating why that one particular swim stroke is called "the crawl." With proper motivation she will swim and roll to get what she wants.
Eldest went to the eye doctor yesterday. His prescription changed 3/4 of a diopter over the last year. He is up to a -4 in each eye. We need to find him a specialist. Just to make sure that there isn't anything else going on.
So he and I went up to McKnight Road in the north hills (You don't realize what a big deal this is that we went 15 miles and through a tunnel and over 2 rivers to get somewhere in one afternoon if you aren't from Pittsburgh. We went to the moon by most accounts.) to go to Eyeglass World and get him 2 pairs of glasses for $60. And yes, you certainly get what you pay for. But I wasn't interested in paying $350 at the place that takes our vision insurance that isn't giving Eldest glasses this year. I can replace a lot of frames for that! Anyway, while we were waiting for his glasses to be made, we went to find Dyed in the Wool on Babcock Blvd. Happily, it was 3 minutes away! But tell me, isn't it a little weird that they don't put a price tag on anything? The Mister says, "If you have to ask, you can't afford it." Which is probably true, but when has that stopped stash enhancement? I did buy some crazyfoot by mountain colors. They charged me $25 which is ok, but the bag that I thought they were giving me free (cheap little canvas tote) they charged me $3. So, unimpressed is to say the least.
On a bright note, Piecing it Together is right next door!
I have been trying to do more quilting and the boys have put new quilts on my to-do list. I don't know if I mentioned that around the same time that INBA requested his red sweater (which is not done, but I am on the second sleeve and feeling Valentine's Day approaching fast. But where is the real motivation when it is 50 degrees out in January?) INBA, of course, wants trains. Eldest said he wanted cars. Well, I enticed him to follow me into the quilt shop by saying that he might find a fat quarter or 2 that he would like for his quilt.
A number of things happened when we got into that store.

There is a game shop almost directly across the street that we stopped to visit. They helped reassure us that we were playing backgammon correctly. And they carry the game series and expansion packs for Ticket to Ride, perhaps the best game ever. I bought a dice expansion for INBA that the guys are all playing as I type.

Needless to say, I am broke after my little trip into the North Hills and I didn't even go into the Ross Park Mall!

Most important accomplishment is that Eldest can see. That we had a great afternoon together, triple double bonus.

That sounds like a fantastic trip! I haven't checked out that quilt store yet. I've done the three in the South Hills (Finleyville, McMurray, Castle Shannon) and adore The Quilt Company a little too much. I also have Turning Twenty sitting in my collection of patterns downstairs. I've buckled down with the gym thing, now I need to buckle down and sew regularly!

Awesome! Sounds like a great afternoon getting glasses! The quilt experience should be wonderful!!

gah! i LOVE ticket to ride. we just got the 1912 expansion for europe.

Congrats on 9 months--we are almost at 7 months, it is going by too crazy-fast here as well. No teeth yet over here either but hey, at least your little one has lots of hair!! I love that your child is excited about making a quilt with you, just fantastic. Thanks for giving your review of some shops on McKnight too, it's nice to hear of places that are welcoming and helpful (or aren't so much)...