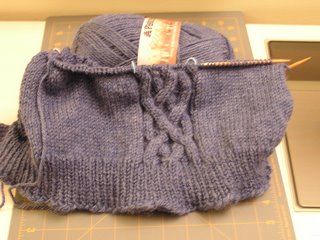 I cannot say that a whole lot of anything noteworthy has transpired this week.
I can say that I love Christmas Knitting... maybe even more accurately, deadline knitting. I don't need any other excuse to sit and knit than that I have to get it done. It makes me happy to spend an hour during the day, in the (relative) sunlight, awake knitting.
Here is the Mister's Blue Cable Sweater. I had set it aside last week and now I am not sure where I am in the cable pattern. Pretty close to the end of the repeat, it seems. If I can figure it out, I will definately get a post-it to keep my place. It is so difficult to let go of the notion that I can remember anything. 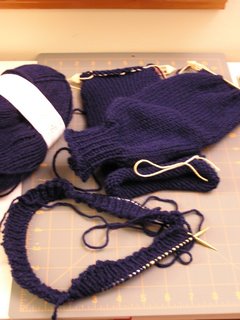 Here is The Sven Sveater. I gave up on doing EZ's Invisible cast on for the second sleeve and just knit up from the ribbing. I rationalize this as a comparison of two methods and am willing to bet that no one other than myself (speaking in reference to the household that it is going to inbhabit) will ever notice.
I am zipping away on the body and am excited to do the yoke. Celtic Queen made this sweater for her niece and nephew and they were gorgeous. I cannot wait to see my niece in it. 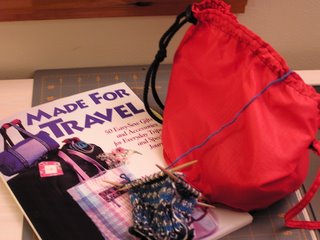 The fabulous and overpriced sock-bag has met it's match. Thanks to Mary Mulari's Made for Travel, I created my own version. I adapted the stuff bag, made it larger, taller, and added a few straps. Ta-da! It is red ripstop nylon. It even has a sock in progress already. The MIL was eyeing my sparkly socks so I let her pick a skein from the stash. Subtle but effective. These will be on the sly and either for her birthday or xmas (which are only 2 weeks apart.) 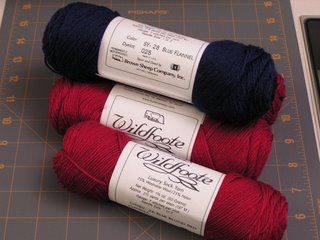 INBA's red sock yarn finally came in. She only ordered 3 skeins for the store so I bought them all. I wonder how having such a limited inventory works for her? Seems to me that it just saves me money and I am sure that it does the same for others... whatever. I did pick up some blue... had to talk the boy into it, but he is going to let me put a blue heel and toe on a pair.

He is so funny. I took him to a preschool class up at the Carnegie Science Center last week. It was about worms, a favorite subject behind Trains, Sharks and Dogs. It was a good time, he made a worm box complete with rotting vegetables and egg shells. They did a little drawing and also made a worm out of a knee-hi stocking. He has been sleeping with "stuffy" ever since. We have a bedtime ritual of "talking dogs" where I converse with them about their day, but only in a scruffy voice and a stuffed dog in my hand. I think this began when they couldn't figure out how the dog was talking because they just looked at the dog and not me and of course I would pretend it wasn't me. Anyway, Stuffy now it the one talking. How do you talk a worm? Irrelevant, he wants the worm to talk like the dog (scruffy voice,) but Stuffy isn't allowed to bark. Ah, another fine example of how we spend hundreds of dollars on toys and really all we needed was a 25 cent stocking and some fiber fill.
Posted by Heather at 8:04 PM

If you gave me a close up of your knitting I could tell you where you are (or at least the row you just knit). Bring it on Friday, I will impart to you the Secrets of Knitting Interpretation (Or, I can't count to 4 reliably, what do I do now?)

It's that whole seeing beyond the "scary" cable thing. It's never as hard as the "experts" make it out to be.
BTW, thanks for the compliments on the Sven Set. I'm sure yours will be just as beautiful (and more appreciated)